skip to main | skip to sidebar

Macy Woman: Please head to the tornado shelter to find your pants.

I am an artist and a nanny so by the end of each day I am covered in some sort of goo that I wouldn't want to see on any article of clothing worth over twenty dollars.


Recently, however, the day came where I needed a pair of dress pants. The building where my studio is located was hosting an event for gallery owners and other people with real art clout. Clothes splattered with paint and booger remnants wouldn't cut it. So for the first time in a few years I headed to Macy's. 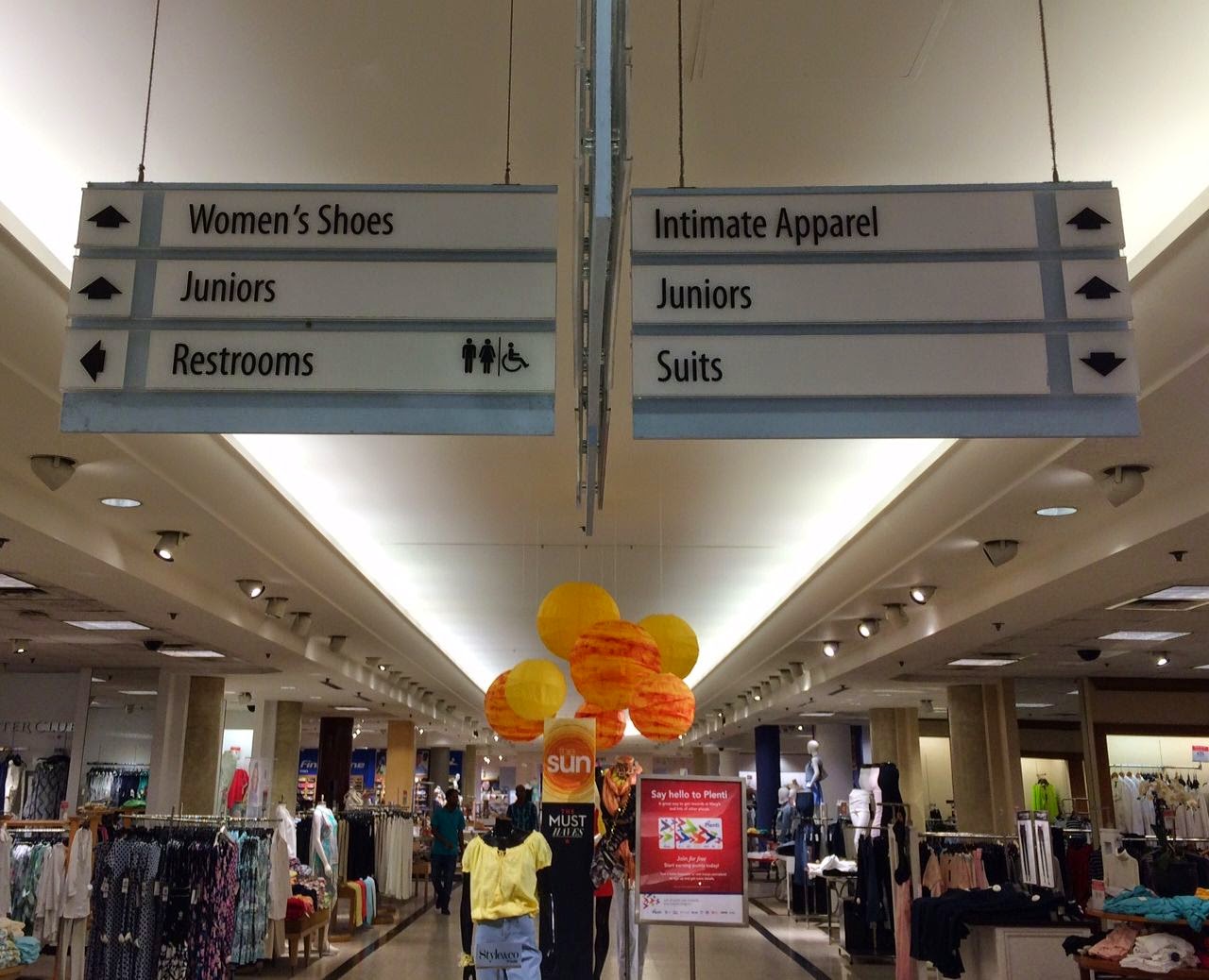 Nothing there. (But you can't miss Juniors.)

There was nothing on Level One either. Although it was interesting to see Petites sequestered there. Often in department stores you find Petites and Plus Sizes side by side because, you know, fat people and short people are always friends and shop together. 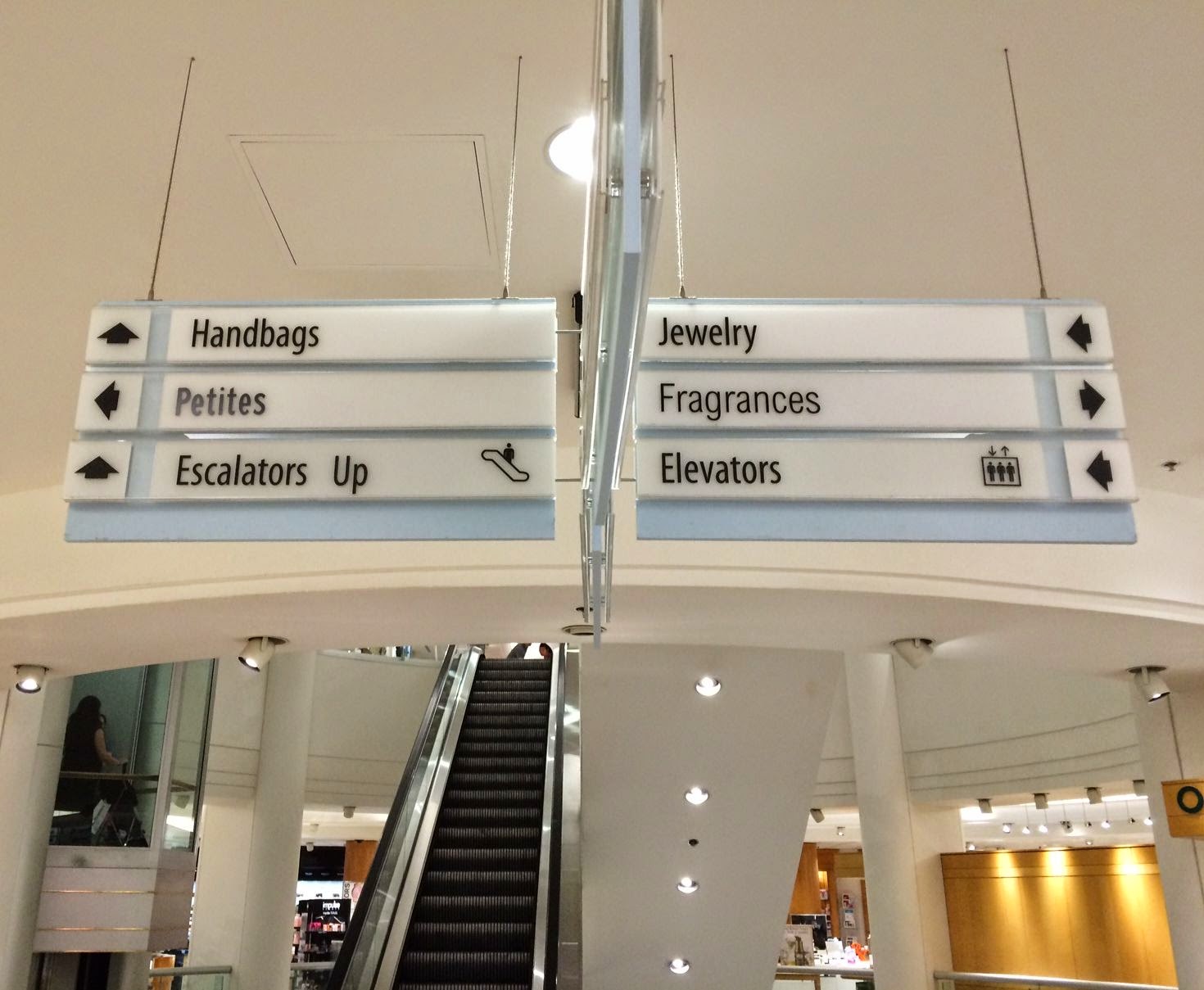 I rode the escalator to the bottom. The sign said nothing about Macy Woman or Plus Sizes. Maybe they had moved the department to a different location all together, I thought. I recalled that years ago at another mall, the Woman had to leave the main store and walk across the mall to another location completely.

But then I saw her. I looked way down the hall and there was a headless body. A Plus Size mannequin. A Woman. 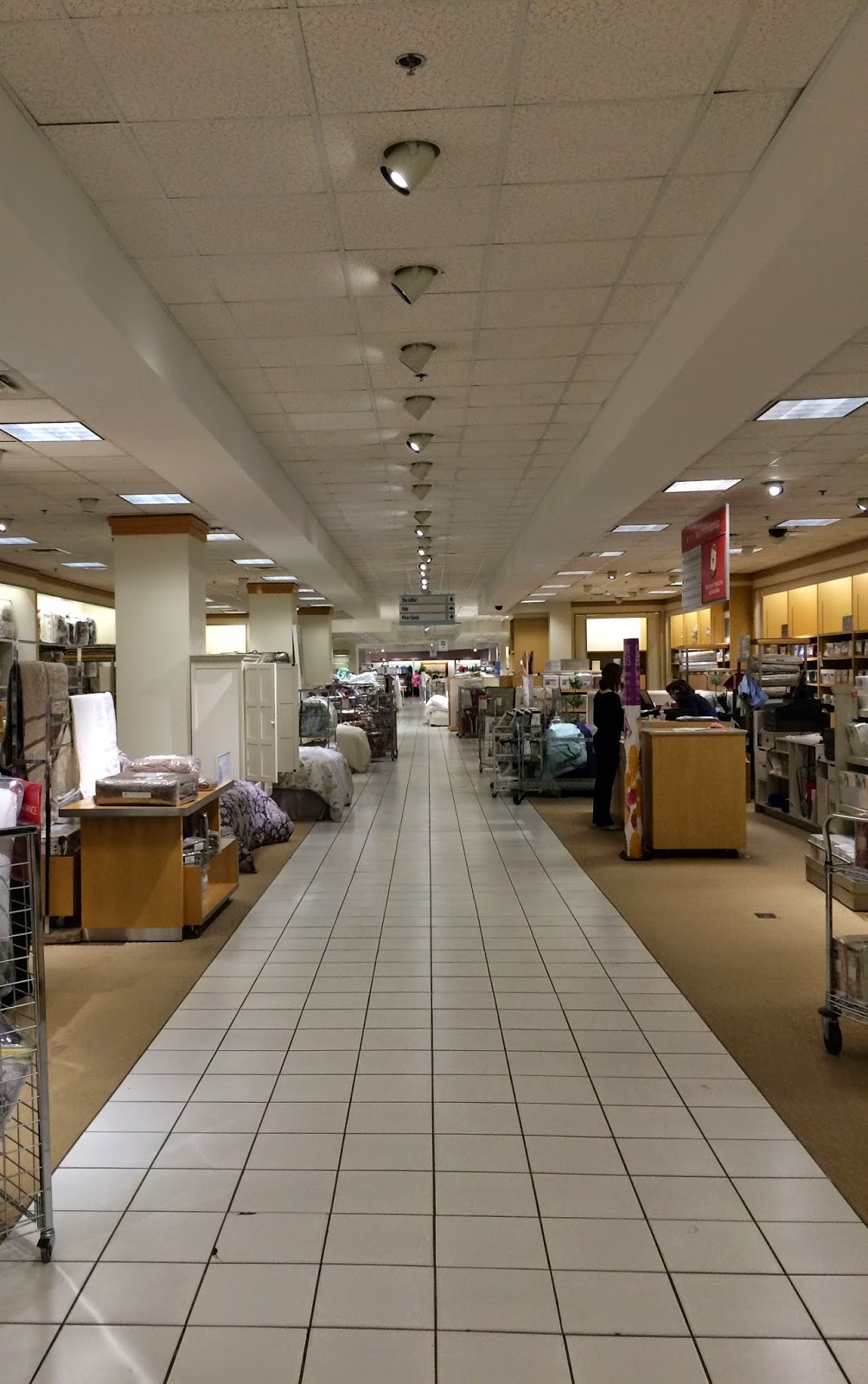 At the very end of the hall, past all of the china and the kitchen appliances, all of the comforters and all of the sheets and towels, past the pillows and rugs and luggage, there she stood. I had found the Plus Size clothing at Macy's.

I made the trek down to the end of that hall to discover why they had decided to move these clothes all the way down to what was really a better fit for the tornado shelter or maybe the last chance discount bins.

I asked the first sales person I saw near the racks if she knew the reason for its separation from the rest of women's clothing. She reminded me of a sparrow. Very tiny, very light - her suit coat hanging stiffly like feathers on a bird. Her small eyes flitted back and forth nervously behind her tiny glasses as she said, "Well, I'm not sure. It's been like this since I've worked here." And then she walked off to Housewares. Not her department.

I found two sturdier women, each a Woman, more appropriately assigned to this department and much more solid in their demeanor as well. I am sure they were trained to be conscious of the store's reputation as well as the customer's satisfaction, so I am certain I was putting them in an awkward position by asking them a question for which their answer may make Macy's management uncomfortable.

"Do either of you know why this department is so far from the rest of the women's clothing?"

They both began with how it had been like that since they started their jobs. I could tell it wasn't the first time they had heard the question so I begged for a better answer and reframed the question. I changed it from simply 'why' to whether or not they found it offensive or absurd.

"Yes" they both agreed, "it's awful." They encouraged me as they "do everyone" to talk to the store managers in the offices "right there." They pointed.

We were so far off the main drag of the store that we were standing only a few feet from the doors of the Executive and HR offices.

In the Executive Offices I was introduced to a store manager named Beth*. She was short and plump and dressed in a very Manhattan black suit, her hair in an edgy blond bob.  She has been with Macy's for over 35 years. We had about a ten minute conversation.

Beth's reasoning for the placement of the department in Tornado Corner (my words, not hers) was the need for more space. More vendors had been added, she said.

"But the old space up on Level Two," I said, "seemed like the exact same size as what is currently in the basement."

I went so far as to offer up my own time to step off the space on Level Two and then in the basement to compare. Beth said that wasn't necessary.

I tried to get Beth to tell me what I guessed is the real reason the department had been moved: to hide it, and its shoppers, in a place where there was little foot traffic, few shoppers.

I mentioned that it seemed offensive that a Woman with money (a woman, perhaps, with an education, a career, and a family) had to come the darker drearier section of the store to make purchases for herself. Meanwhile, the juniors, the younger (and let's face it, thinner) shoppers, many without their own money, are celebrated upstairs with better lighting, decorations, various other departments and even simply more people around her to keep her company.

"Well," Beth said, "we moved Macy Woman down here to have more space."

That's when I decided I needed to take a risk. I asked Beth if she herself shopped in the department, knowing that that she may take offense. That is, after all, an expectation. One must not ever admit to shopping in the Plus Size department. Shhh. They are in the basement, you know, where fat people have to shop.

She openly admitted it. And she said she loved the privacy of having the corner of the basement to shop in.

Emboldened, I took risk number two. "Because you're fat and ashamed?" (I can ask this because I am fat and not ashamed. If I were thin, I may have been attacked for asking. If I were ashamed, I may not have been able to ask without crying.)

Her immediate answer stunned me. "Yeah, I guess." Looking at her, I smiled and nodded silently. Caught! For a moment I had her. I saw on her face that she knew I knew. I knew that she was full of it and everyone understands that the Macy Woman has her place in the basement because Macy's wants her there. For about three seconds she let me know that she understood that the clear messages Macy's is sending its larger female customers is "You don't really matter.' and 'Be ashamed'.

Then I lost her. I asked about the messages they might be sending to customers and the light went off and she began to talk about how Macy Woman is big business for Macy's, that Macy's loves their customers.

Beth paused. Then she asked me where I liked to shop. I didn't want to offer her marketing tips. It seems like a woman who has been in retail management for 35 years should be aware of how her market works without having to ask me.  I declined to answer. But I will tell you.
First of all: Not in the basement, unless it's one of those clearance stores where it's ALL in the basement.

I want to shop where the sales people look delighted to be in their department. Not disgusted.

I want to find current styles in my size at the same places all women shop; NOT just the short and large ones.

I want to shop at places that celebrate every woman for being exactly who she is.

I want to shop where I am not differentiated because of my (PLUS) size. We are all women - with sizes. No one is a Plus Size. No one is a Woman.

*Beth is not her real name.

Posted by Cami Applequist at 11:47 AM

I really like the way this was written. Great job. Something we as women should all take this into consideration. Size should not matter, but our society makes us think it does.

Wow. Kudos to you. Even the mannequin looks sad.like get me out of here. Her pose looks ashamed and defeated. I think poor Beth has been through it all with Macy's and she's never going to speak up.

Where to find me!

Inside Out Lowertown Project 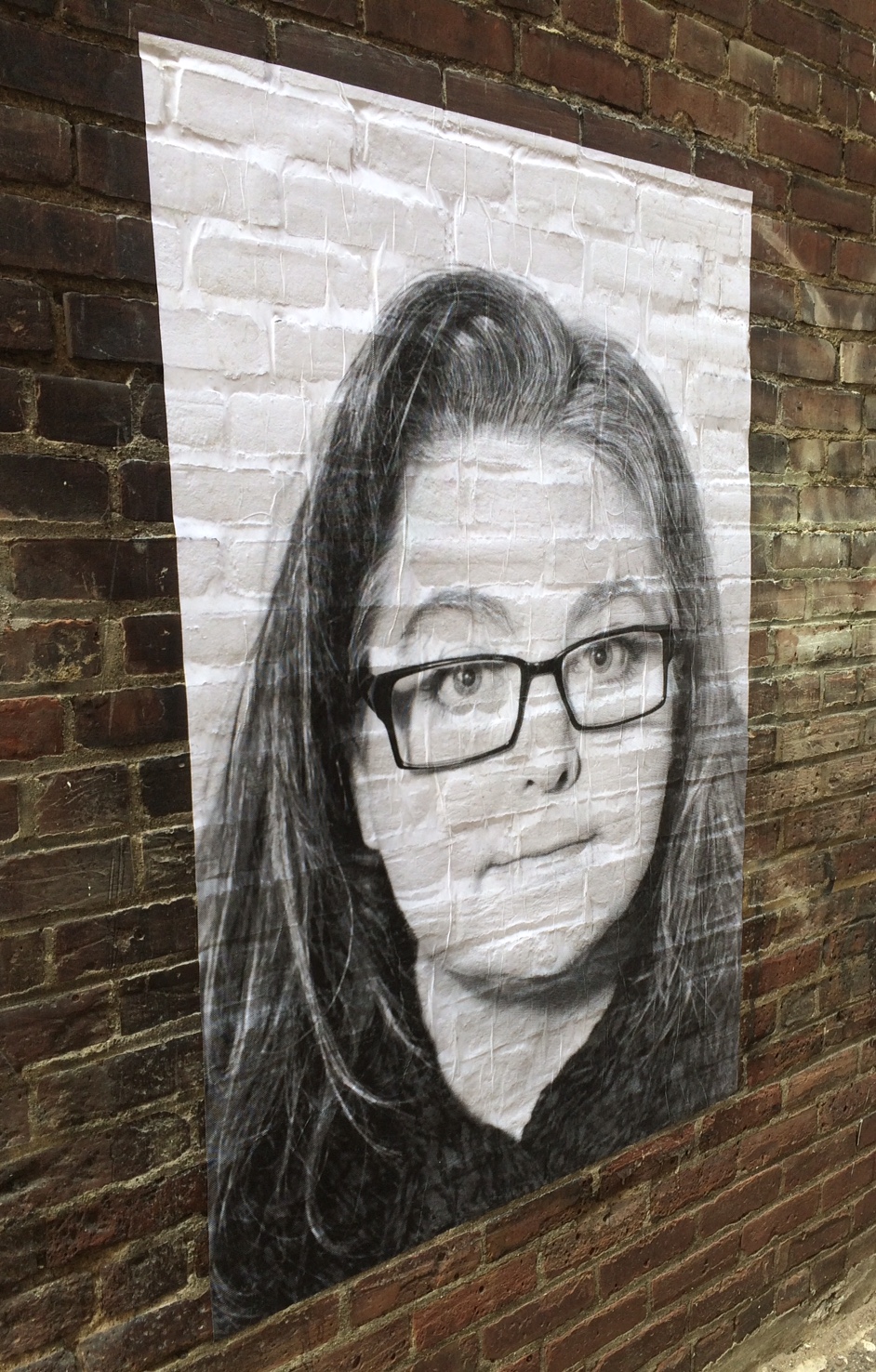 This is me - photo by Patrick Clancy - also of Lowertown Lofts Artists Coop!

When you see me addressing "kids" in my posts I am talking directly to the kids to whom I have been a nanny. Some of them are now old enough to be reading this blog and I want to make sure I am not becoming a bad influence - because I am certain I never was before. (right, kids?)

You can contact me at CamiApplequist@aol.com if you wish. Even if you're not a kid.